This week I got to revisit Pineland Farms Trail Running Festival! I basically did a repeat of last year’s races. Zorro and I did the canicross 5k and I went back the next day to run the 50k. Pineland has such a great festival atmosphere. The start/finish area is in a big field and teams set up tents and camps around the whole perimeter so you’re always bound to see someone you know.

Zorro and I are part of the Kurgo Running Team this year so Pineland was a great event for our second race this season! Before the race we met up with the Kurgo team and some friends from SIX03 Endurance who were there running the canicross, 5k, or 10k that morning.  Pineland’s canicross race is really big — 210 human-dog teams!  This means the race can get pretty chaotic at the start. Dogs are barking and pulling to get going. Racers have to watch out for other dogs and leashes that can trip you from behind or the front. 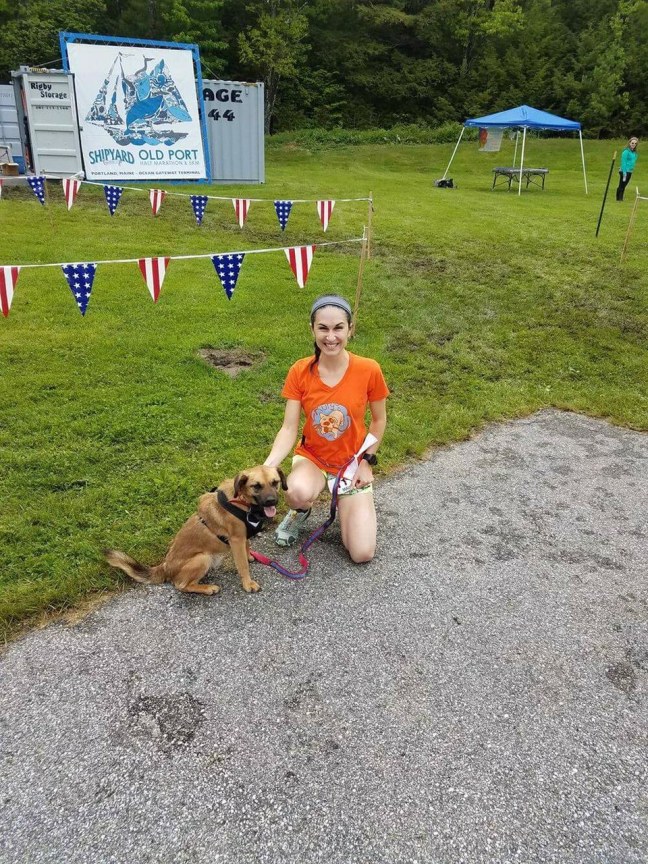 Since Zorro had a strong race the week before, we settled ourselves in the first third of the starting pack. I knew Zorro would want to go out fast. He likes the first mile of a race and slows down to some extent by the end – the question is always how much he’ll slow down.  The race started and Zorro darted out ready to sprint.  The first mile is downhill, so Zorro was pulling and having a great time passing a lot of people along the way. I figured I’d let him do whatever he wanted pace-wise since it was all for fun. He was averaging 6:45min/mi pace for the first three quarters of a mile, then he started to slow down quite a bit. We went through the first mile at 7:35min/mi. Then, Zorro wanted to stop every few feet to pee on things or drink water.  We went with it. Our second mile was 8:38 with a pretty long water stop break.  By the last mile Zorro was pretty much done.  The last mile has 130ft of elevation gain and he had slowed to a trot. He pooped – twice – and we were just jogging it in.  Right as we were turning the corner into the finish line I heard someone call out from behind me “On your right” to indicate he was passing.  I started to move over to give him space and then I was down on the ground.  His dog had decided to go to my left while the human ran to the right and his leash caught me behind my knees and pulled my feet from right out under me.  I landed hard on my left hip. It hurt a lot and was pretty scary for Zorro. Our last mile was a 9:55min pace, even with the wipeout. Zorro had an official time of 25:26! A huge improvement over our 33:28 from the year before! We even got 3rd in our age group!

On Sunday, I went back up to Pineland to race the 50k.  I learned how to race ultras last year when running a bit of my first one with my friend Scott.  He started walking an uphill and I was surprised since he is one of the strongest trail runners I know.  He said “Walk early and walk often.” I followed his advice and finished feeling pretty strong and happy and like I definitely wanted a bigger challenge.  Within 24hrs of finishing my first ultra I signed up for VT50.

This year I got to share Scott’s knowledge with his girlfriend, Holly.  She was recovering from a pretty nasty ankle sprain that had sidelined her for a couple weeks and I was at the end of a 70 mile week. We knew we had to be conservative to get the job done and we have very similar road race times, so we decided to run the race together. She knew she may have to DNF if her ankle acted up and I knew I would have to back off if I started feeling really fatigued to make sure I avoided injury.

We ran every step of the race together. Even the step where I (for no apparent reason) face planted about 10 miles into the race in almost the exact spot where Zorro and I were taken down the day before.  Holly and I celebrated at mile 22 when I hit my biggest mileage week ever. Then we celebrated again at mile 26.3 when Holly hit her longest run ever. Then we celebrated again with a big hug when we crossed the finish line together – uninjured, strong, happy, and with Holly being an official ultramarathoner!  It was an amazing experience to share with such an awesome person.  I loved being able to share a bit of the experience I had gained over this year of ultra running with her along the way just as Scott had done for me the year before.  We finished in 5:23:36 which got us 9th and 10th women and 3rd and 4th in our age group. Not bad for a training run!

In other notable moments from the day… SIX03 Endurance won the 50k team prize for fastest four team members.  Mick Arsenault, Alan Bernier, Alex Shaffer, and I rounded out the placing.  My friend Heather qualified for VT100 with a great 50mile finish after some setbacks earlier in the month.  My friends Tracy and Randy overcame so much for their 50 mile finish – they hit me in all the feels.

All in all, it was a great week. I hit my highest mileage ever, I feel strong and uninjured, I got some experience falling and getting back up, and I got to run a lot of miles with my pups!

Weekly mileage: 69.6miles running; 0 walking (The dogs mostly ran with me this week!)